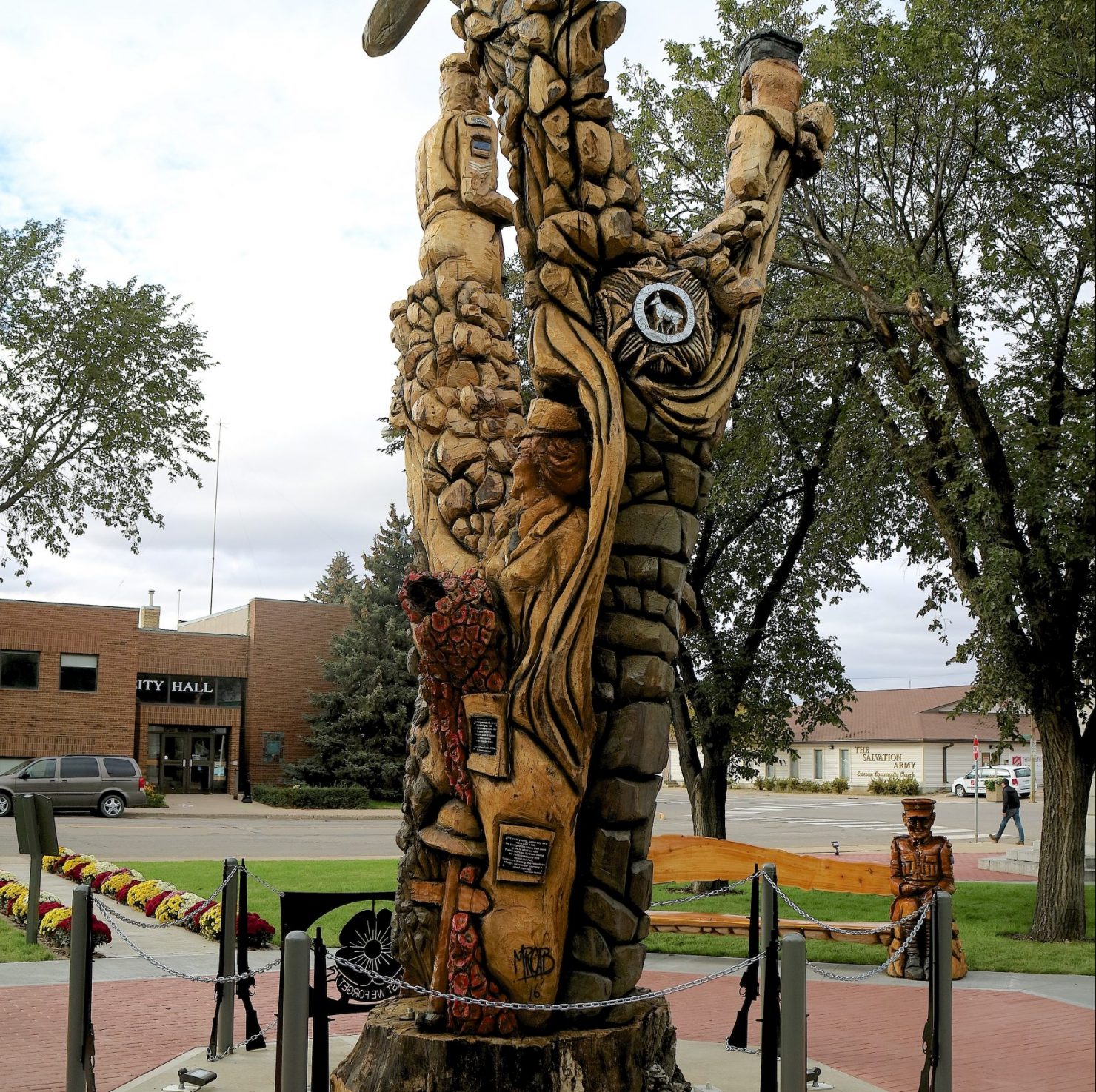 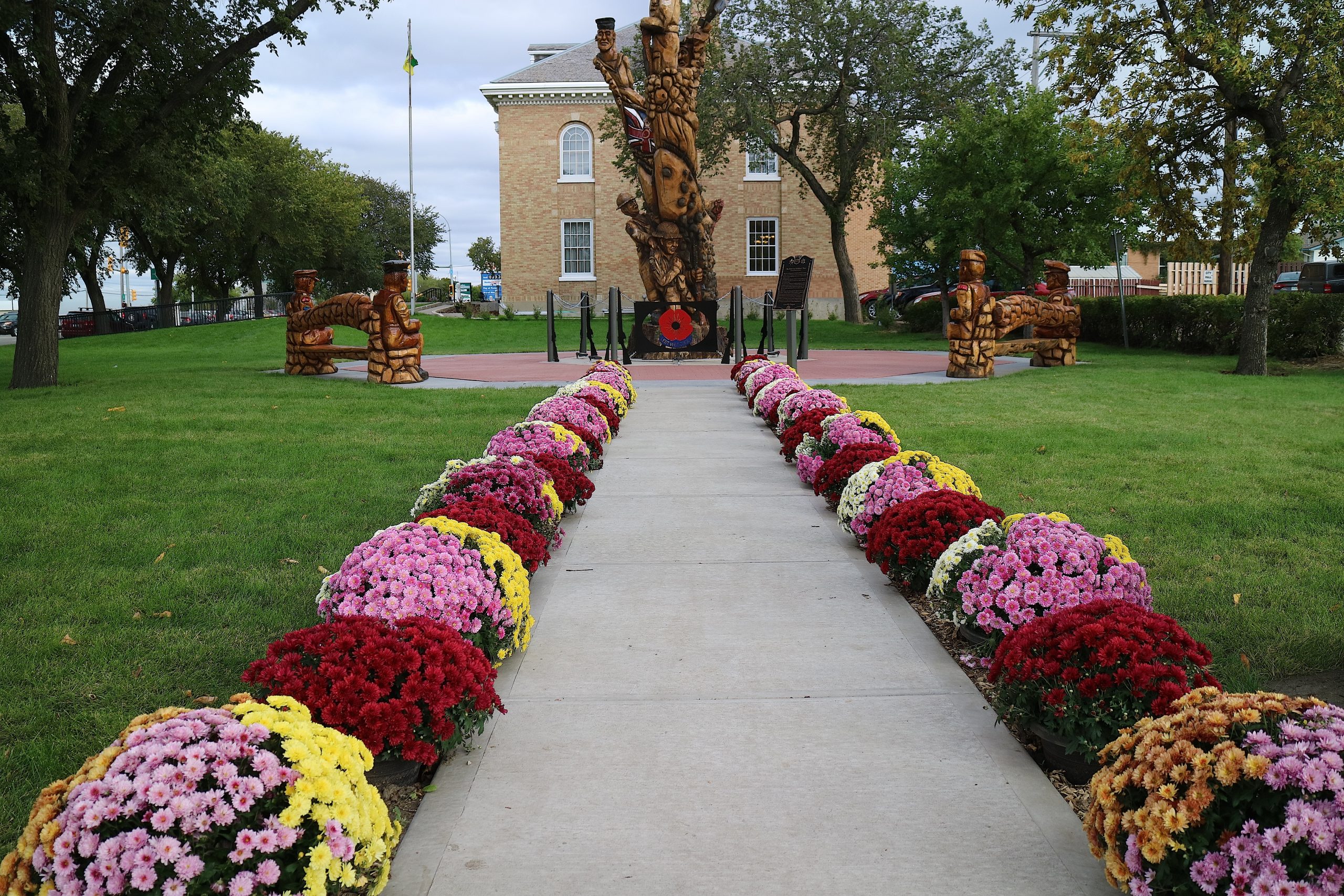 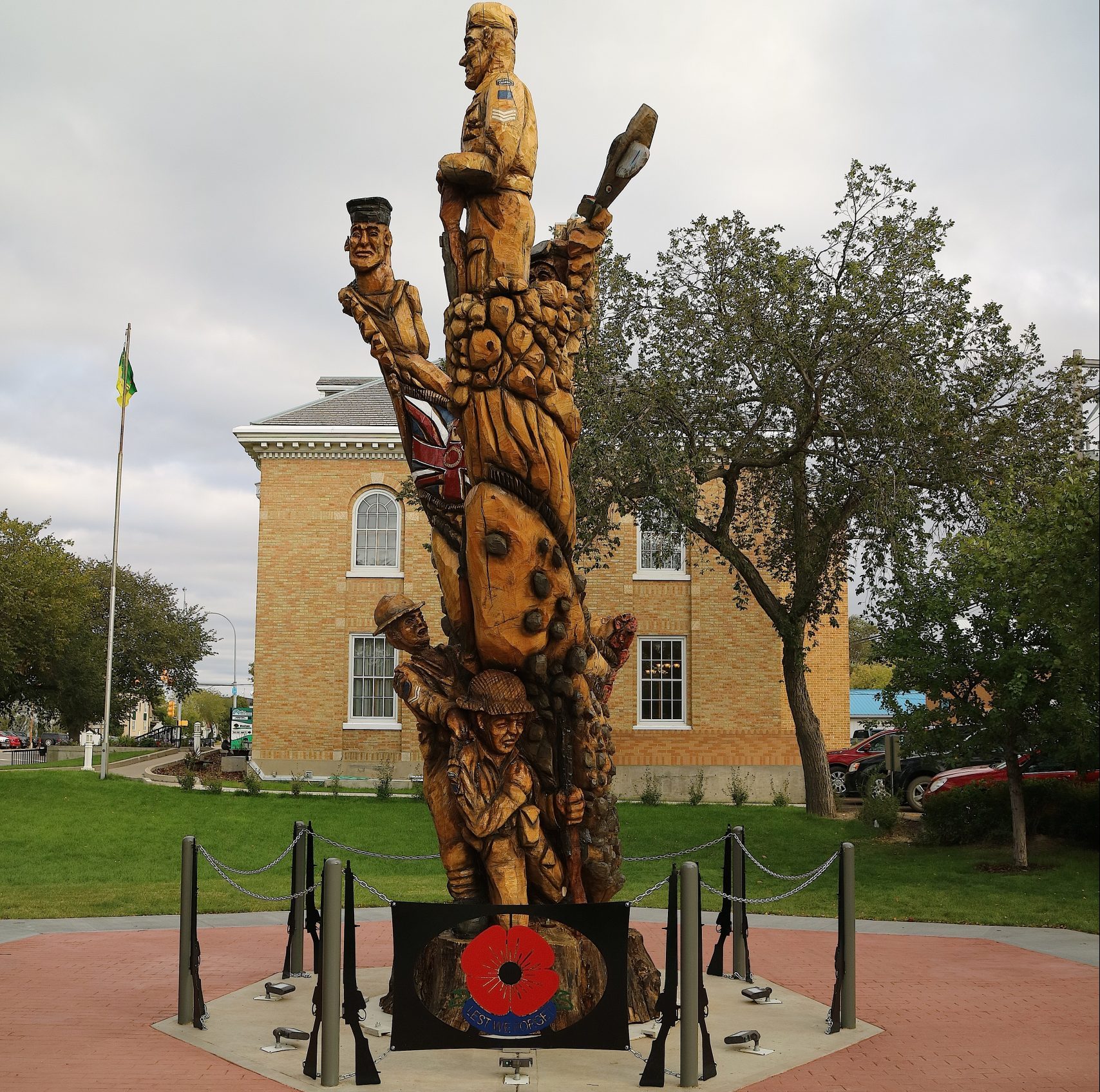 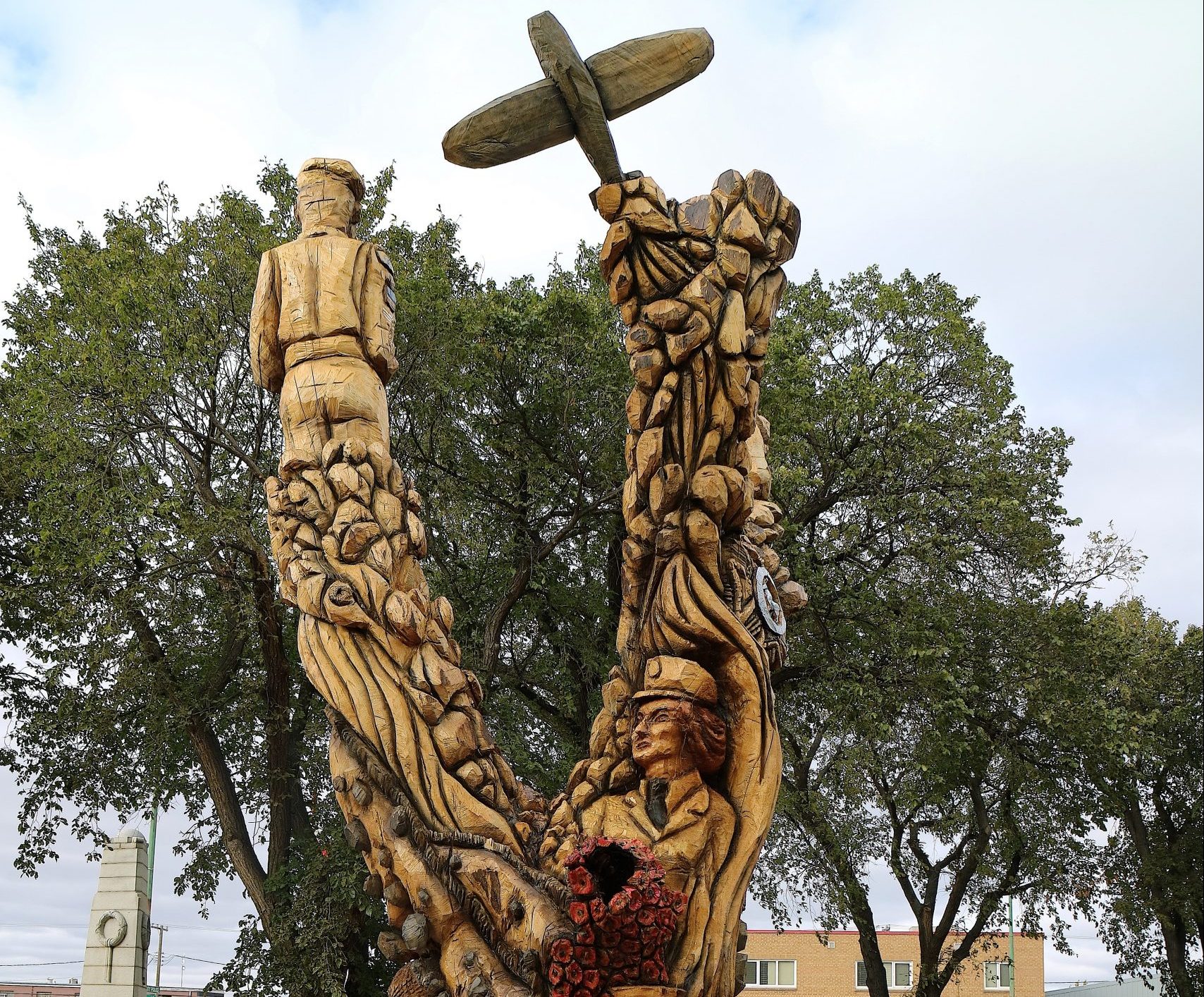 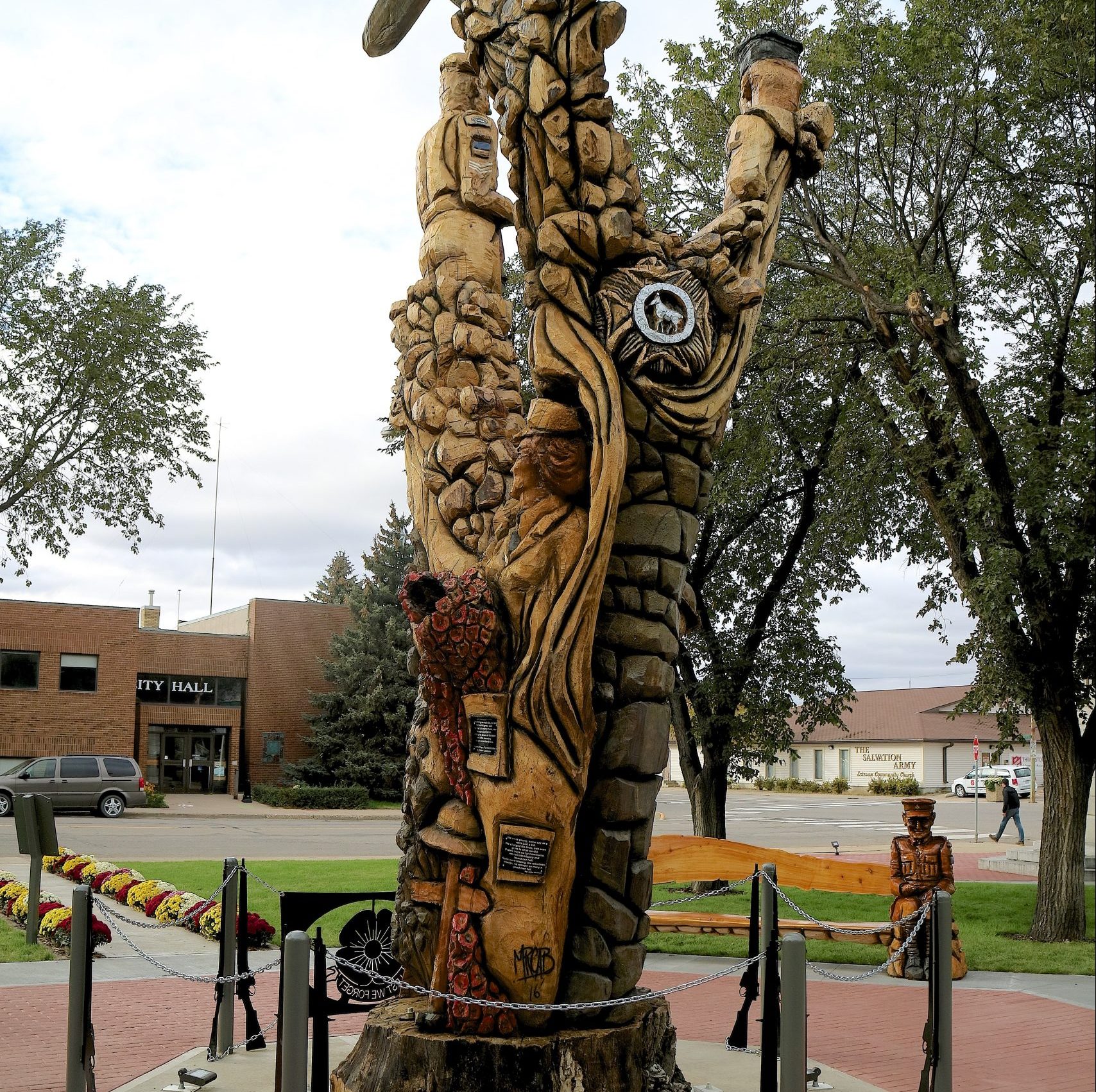 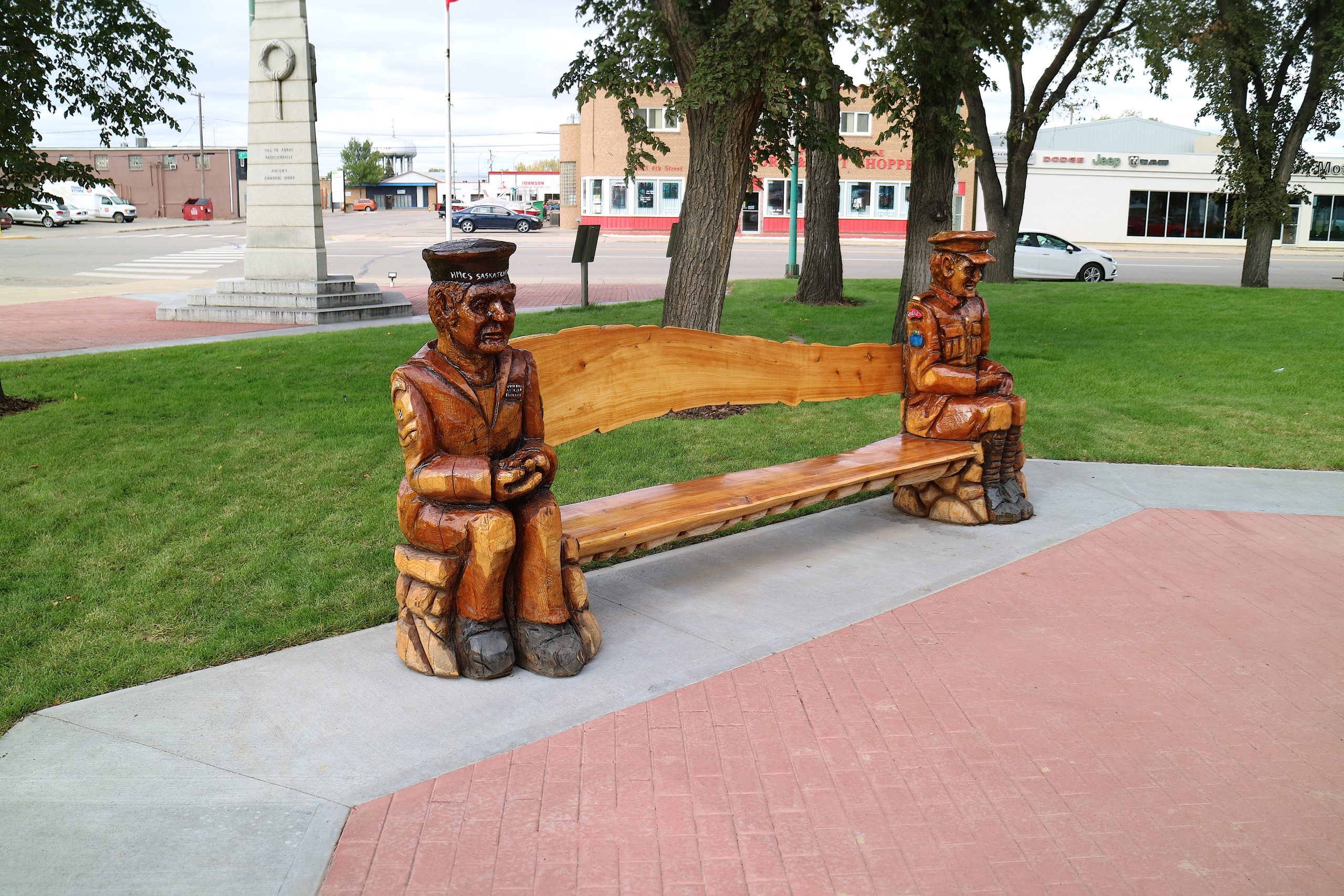 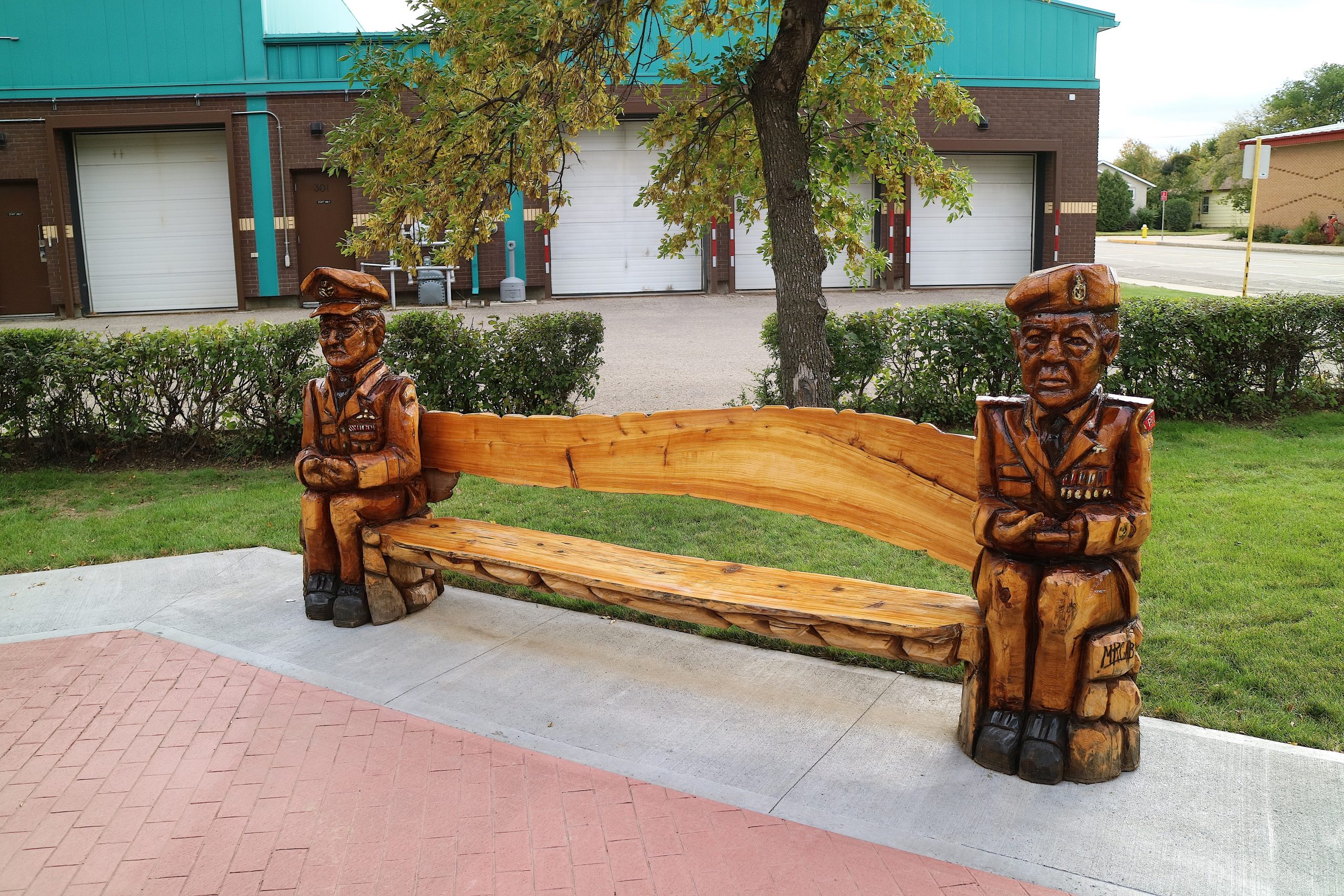 The Soldiers’ Tree was carved with a chainsaw, by Darren Jones, out of a 100-year-old cottonwood tree from the Estevan area.

The carvings not only tell us a story, but they also remind us of our own service and sacrifice. Whether from ourselves or grandparents, parents, siblings, children or other family members and friends. It connects us all, in honour and memory, reflection and remembrance.

As you approach the Tree…

You will immediately see two soldiers. On the left of the first soldier is an explosion, wounding him. The Corporal behind him is pulling him back to safety. Two important military principles and depicted here; firstly, a soldier and his rifle are one, despite the situation, both soldiers still have their rifles in hand, ready for action. Secondly, soldiers soon learn that not all of them will go home, but if they help each other out, some of them might. This is the buddy system. 730,000 Canadians served in the Canadian Army during WWII.

At the top of the tree, is a Royal Canadian Navy Sailor. By war’s end, Canada had the world’s third-largest Navy with 95,000 men and women in uniform and 435 commissioned ships.

A female Royal Canadian Airforce Sergeant, taken from a WWII recruitment poster is depicted on the side of the tree. “We Serve So They Can Fight”; represents the endless non- combat duties that women carried out in support of the war effort.

The top center of the tree is a Royal Canadian Air Force Pilot and a Spitfire airplane. Canada fielded the Allies’ fourth-largest air force in WWII, with 249,000 men and women serving in the R.C.A.F. An Army Sergeant is Resting – On- Arms- Reversed, in respect for the fallen comrades.

A battlefield grave with a spray of poppies adorns the bottom of the tree.

Starting with the benches on the north, the carving seated on the left, is a Royal Canadian Navy Petty Officer, who served in WWII and remained in service after the war and sailed aboard in the HMCS Saskatchewan. He is holding a poppy in his hands. Beside him is a verse from the Hymn, “For Those In Peril On The Sea,” written by John Bacchus Dykes. This Hymn is traditionally invoked by a Ships Chaplain and sung during Navy Services and Ceremonies.

Sitting on the other end of that same bench is a soldier from the Princess Patricia’s Canadian Light Infantry (PPCLI). He is holding a poppy in his hand, commemorating his service in WWI. The PPCLI was formed at the onset of WWI and was the first Canadian Regiment to face the enemy. Beside him is the poem “In Flanders Fields,” written by Canadian battlefield physician, Lieutenant Colonel John McCrea.

On the South bench, seated on the left, poppy in his hands is a WWII Flying Officer from the Royal Canadian Air Force. Canadian pilots airmen of Bomber Command, Fighter Command and Coastal Command, suffered the highest casualty rate percentage of Canada’s three military services. Beside him is the poem “High Flight,” written by R.C.A.F fighter pilot John Gillespie Magee Jr.

On the other end of the bench sits Master Warrant Officer Ivan Finstad. MWO Finstad served with the Princess Patrica’s Canadian Light Infantry as a career soldier. He participated in many deployments in the Middle East and Europe. He is holding a poppy in his hands. Ivan’s last posting was a Detachment Sergeant Major at Canadian Forces Detachment Dundurn. Ivan was raised and attended school in Estevan. He represents the soldiers of today. Beside him is the poem, “I Saw The Soldiers Marching,” written by Canadian poet A. Lawrence Vaincourt.