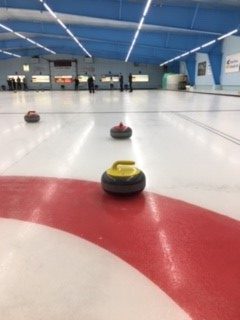 Becky: The Home Hardware Canada Cup was recently in Estevan and I had the opportunity to Volunteer at it. I worked in two areas; Ceremonies, bringing the teams to the ice and The Patch, working behind the bar. I had a blast doing both jobs but it didn’t top what we recently did.

During the Cup, Denille and I were kidding that we might be in the running for the next Olympics and that we would be able to take team Jones on. ( I said Kidding!) Once the event was over we spoke to the Estevan Curling Club to see if we could try out the sport. 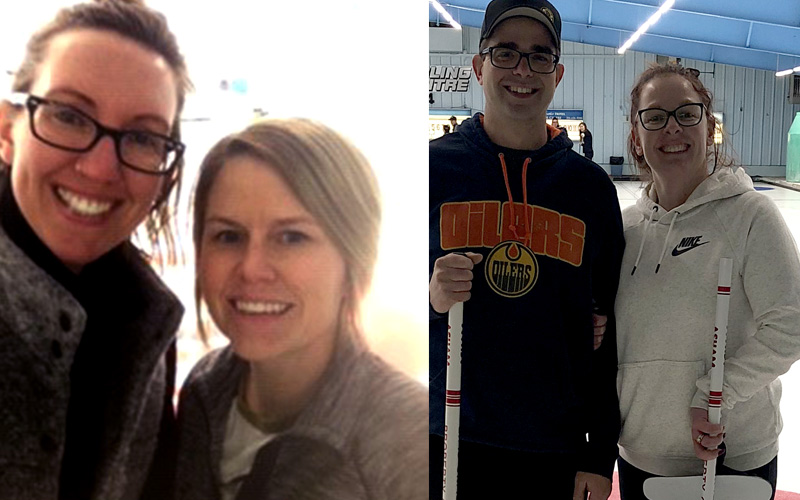 We arrived with our “dates”, she with her friend Dana, and I brought my Husband, Curtis. Dana and the Hubby had curled before but Denille and I had not.  When we arrived we met our instructor Shelley- she is a volunteer and active member of the Curling Club. She first showed us some stretching techniques, then introduced us to sliders- the things you put on your shoes so you can either make your way fast down the sheet of ice or in my case, make you become so unstable you feel like a newborn deer just born. Either way, you need to wear one slider when curling.

Next she talked about brooms and  how to hold them. Holding them the “Correct” way seemed so awkward to me. But I was determined to do it right, thinking if I mastered the fundamentals I would beat my husband. 🙂 #mummawins

We practiced sliding out of the “Hack” (the starting position) and sliding the rock down the ice trying to make them stop in the rings – in technical terms, the house. It started off really shaky and the more we practiced, the better Denille, my husband and Dana  got. I just stayed the same shaky deer out there.

After the instructor thought we improved a lot, or would never have any hope; we started a game. We all took turns in each position, the skip, the player throwing the rocks, the sweeper and in my terms, the one having a “rest”.

Dana and Curtis ended up on a team and Denille and I. Who picked these teams? I was somehow set up to lose!

Denille: Okay Becky! I think I brought a lot to the team. Once I figured out how to stay upright and no longer needed to use my broom as a paddle to row myself down the ice things started to click. The trickiest part was figuring out how much “weight” you needed to throw the rock. Throw the rock too heavy and it bounced off the backboard; too light and the stone didn’t even make it to the Hog line. In sync as Becky and I were, apparently a rule of the game is you cannot push your team members rock into place.

After a couple ends we all started to look like we knew what we were doing. We had several rocks in play, made some successful shots, sometimes on purpose!

I don’t know about you Becky, but I am looking forward to the next open house at the Estevan Curling Club. That was a wonderful opportunity to learn to curl with some very nice, and patient instructors. Rematch?

Becky:  I am up for another, but this time let’s mix it up. The Leisure Centre has this new Crokicurl rink set up. I think I would be good at that. 🙂