The Orpheum Theatre in Estevan, Saskatchewan, Canada was opened on April 6, 1914, with over 600 seats and has been continuously in 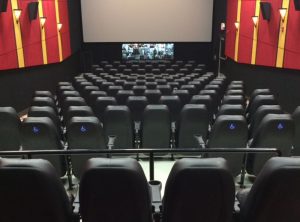 business ever since. It was built by Henry Emerson McKenzie. He operated it until his death in 1917 at which time his wife, Jennie June, took over. John (Jack) McKenzie owned the theatre from 1924 -1940 and then his son John (Duane) McKenzie along with his wife Mary Louise McKenzie purchased the theatre until 1961. Frank Mus leased and then purchased the Orpheum in 1962. Frank, along with his sons Earl and Chuck and daughter Alice King ran the theatre for approximately 36 years. In 1998, the present owners, Alan and Jocelyn Dougherty purchased the theatre. So, the Orpheum Theatre has continually been a family-run, independent business. Independent theatres – especially ones that have been operating so long – are becoming rare.

In the silent picture days, pianists and, at times, even orchestras were hired to supply the music and sound effects. Stage shows, touring players and local drama were shown frequently. “ The DumbBelles”, a leading Canadian Vaudeville group and Arley Marks shows were among the attractions. In 1917, the theatre was used on Sundays for the Presbyterian Church services. In 1919, a mass meeting of returned soldiers was held in the Orpheum to help the returned men reestablish in the community. By the end of the Second World War, the Orpheum had established itself as a “go-to” establishment for news as well as entertainment.
The first time a “talking picture” was shown at the Orpheum Theatre was in the fall of 1929. It was the fourth theatre in Saskatchewan and the 52nd in Canada to have sound equipment. The Orpheum had taken on a huge investment of $12,000 to install the newest sound/film system. Admission to the talking pictures then was a mere 20 cents for adults and a dime for children -that illustrates the significance of the $12,000 investment. 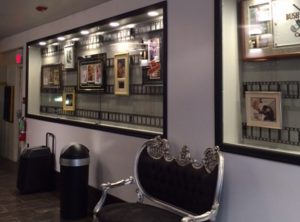 In 1930, the Orpheum was the First Theatre in the Dominion to receive the Bronze Plaque for Sound Production by the “Exhibitor’s Herald World” of New York. At the time, Mayor D. Bannatyne congratulated Owner Jack McKenzie with a speech, “… that we are lucky to have one of the best-equipped, and most comfortable theatres in the Dominion. Mr. McKenzie provided entertainment for the citizens of Estevan and district, such as is unequalled in any town in the Province of Saskatchewan, and in but very few towns in the Dominion, and by doing so he not only earned an enviable reputation in his particular business circles but has put Estevan in the lime-light as an up-to-date and progressive community.”

In 1947, a large addition was added to the theatre which housed the washrooms and box office. The theatre continued to host live events including musicals, plays, and town meetings. To give some examples, in the 1960s, the Platters performed, in the 1970s, Wascana, the Boogie Man Band, the Three Week Jam Band and the 5th Amendment performed, and in the 1980s several bands including Kick Axe performed at the theatre. In the 1950s, the Orpheum became one of the first places in Estevan to install air conditioning – people flocked to the theatre to cool off and enjoy a movie.

Since purchasing the theatre in 1998, the Dougherty’s have given it a complete makeover – including plumbing and electrical. They have tried to give the theatre a classic “40’s look”. Other than installing new seats, they have kept the large auditorium as is so as not to change the excellent acoustics. In 2010, they transitioned into the world of digital and 3D. The theatre still has the equipment and capability to show 35mm film. Recently the Doughertys have added a new basement for the washrooms and built on to the facility to add another screen. As of April 6, 2014, the Orpheum officially became a twin theatre (100 years after the first screen opened). The facility is now completely wheelchair accessible, boasts 7.1 surround sound, premium deluxe rockers and stadium seating in the new cinema, and 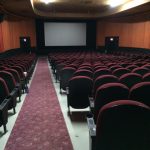 During the Dougherty’s ownership, besides showing first-run movies, they have been host to the Energy City Film Circuit as well as many live performers such as Randy Bachman, Jack Semple, Dr. Hook, the Legendary Ink Spots, Nazareth, April Wine, Stampeders, Streetheart, Five Man Electrical Band, Chilliwack and Little River Band. Several couples have even said their wedding vows at the theatre. After 100 years, the Orpheum Theatre still remains as the place to go for the first date, a night at the movies, or an evening out with your friends at a live performance.