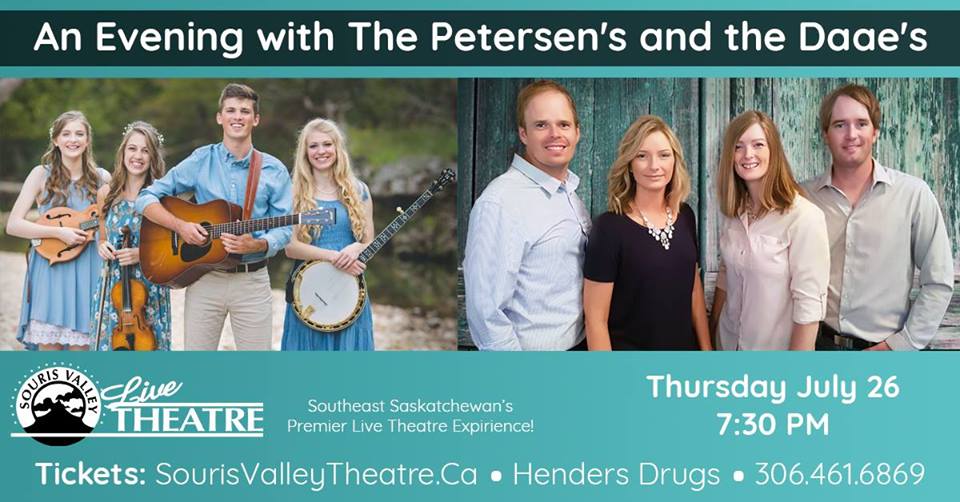 An Evening with The Petersen’s and the Daae’s

About the Daae’s
The Daae’s are a 4th generation family group, with tight harmonies and full live-band accompaniment. You’ll enjoy their varying styles of gospel music. From country, to bluegrass, contemporary, soulful, and old-fashioned Gospel-revival; there are many genres/flavors that have mingled through their music over the years – with the constant being the message of the gospel. They play toe-tappin’ hand-clappin’, and deep and thought-provoking songs.

Their latest recording titled “Open Book” was released in June of 2018. They make each concert unique by playing songs that they have written as well as songs that have spoken to them personally. This family is from the Saskatchewan prairies and is of Norwegian descent – which is why their surname ‘Daae’ is pronounced “DOE”.
You’ll hear and enjoy some of the music that has influenced so many of the well-known artists of the day. The Daae family has played up to 120 concerts a year and is excited about every opportunity to play and sing together!

About the Petersen’s
The Petersen’s are an award-winning bluegrass band from Branson, MO. They began playing bluegrass in 2007 when they stumbled across a bluegrass festival while on a family road trip.
After their father retired from the United States Air Force, the family moved to Branson where they started to have more opportunities to play at Silver Dollar City, local festivals, and churches. After winning a gospel sing-off in town, the family was offered their own Branson show at the Little Opry Theatre where they have performed for the past eight years.
In 2015 the band received international attention when banjo player and lead singer, Ellen, competed in the singing reality TV show, American Idol, and placed in the top 48. The band consists of mother, Karen, on the bass, oldest sister, Katie, on the fiddle, second oldest sister, Ellen, on the banjo, the brother of the family, Matt, on the guitar, and the youngest of the family, Julianne, on the mandolin. The newest addition to the family is Emmett Franz from Berryville, AR, on the dobro.
The family tours throughout the United States, Canada, and Ireland, but spends most of the year performing at their bluegrass show in Branson.

About Souris Valley Theatre:
Located at Frehlick Hall in the Woodlawn Regional Park, the Souris Valley Theatre is a non-profit professional live theatre. Our season runs during the summer months and consists of 2 main stage productions. We also host many other events which may include concerts, Fringe shows, children’s theatre and other unique events.
Along with producing a dynamic theatre season we also host summer theatre camps for children ages 6 and up.