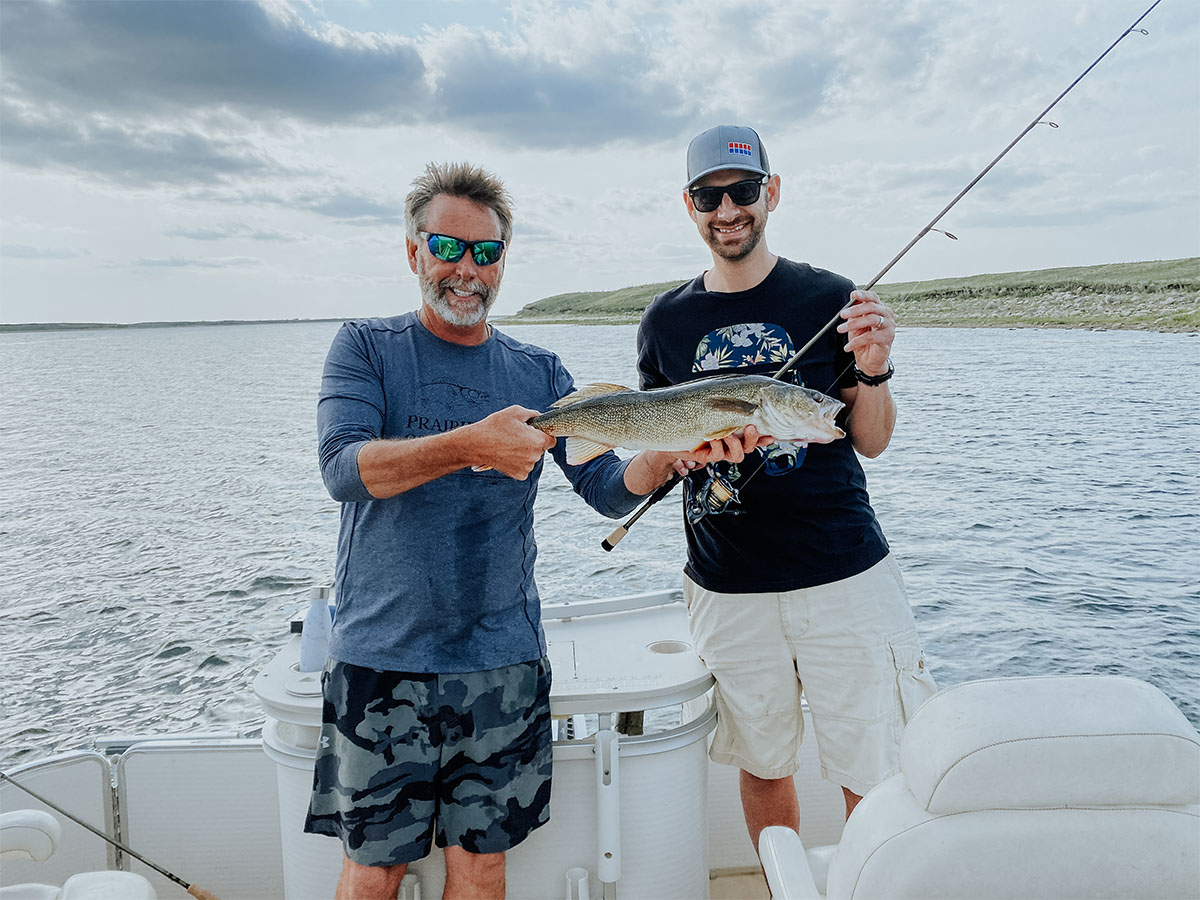 Here in the southeast corner of the province, Estevan is fortunate to be nestled between some signiﬁcant bodies of water. One that I haven’t explored too much is Raﬀerty Reservoir but that all changed when we had the opportunity to spend a day on the water with Ralph Smart of Prairie Pro Outﬁtters. 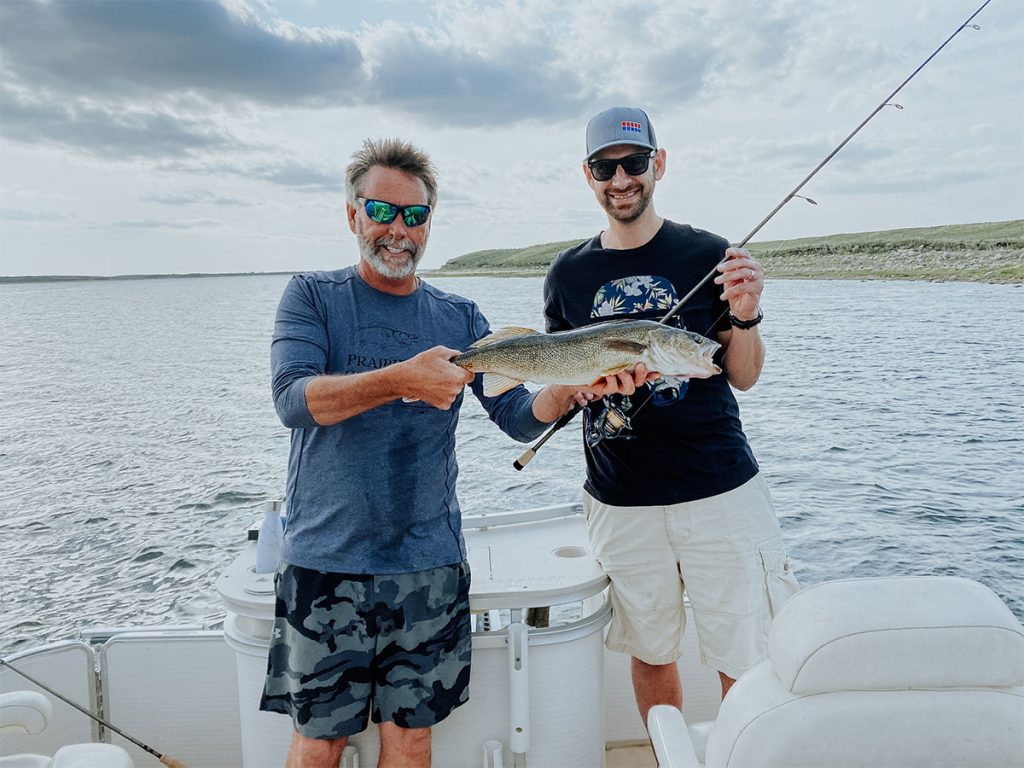 Prairie Pro Outﬁtters owns exclusive guiding rights to Raﬀerty and just launched their services this spring/summer. Ralph has over 60+ years of angling experience, including being a tournament ﬁsherman and it is evident in everything he does. The slogan “Catching Memories” describes their service perfectly – the day we spent ﬁshing with Ralph was ﬁlled to the brim with new memories and will go down as an experience that our family never forgets. 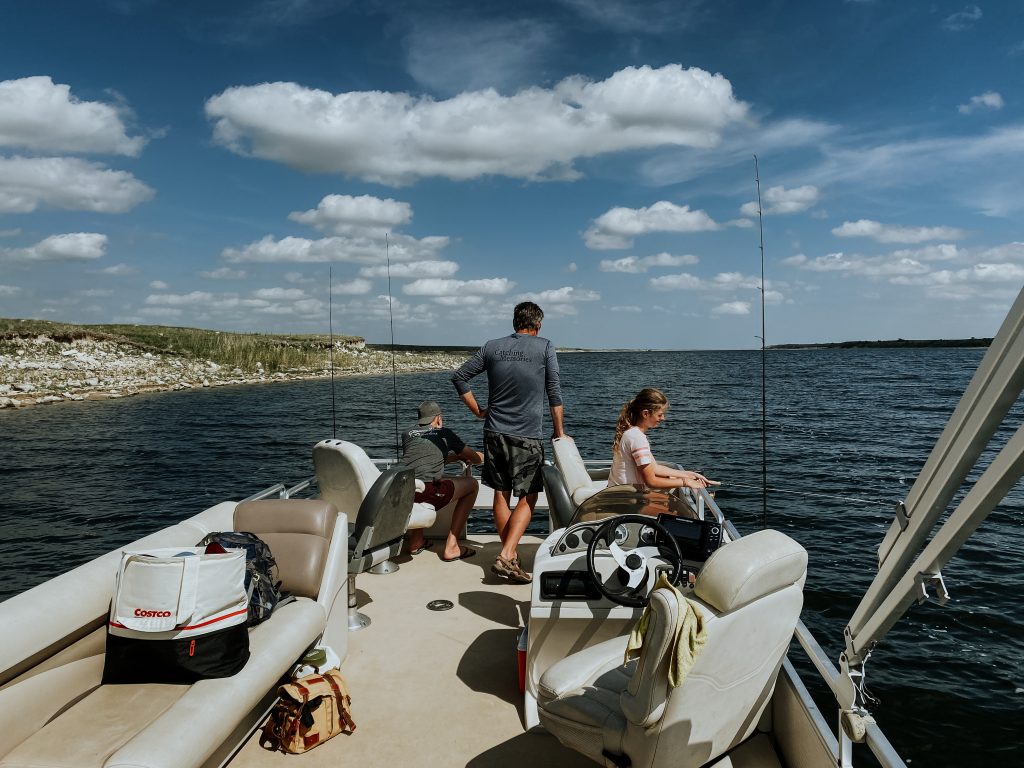 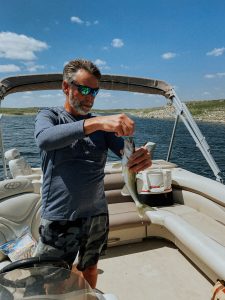 I hope Estevan and those visiting soon realize what an incredible opportunity Ralph oﬀers as every single part of the experience is top-notch and I would be hard-pressed to ﬁnd a parallel to the caliber of service, knowledge and adventure he oﬀers.

Ralph’s enthusiasm for what he does was evident right from setting up the day via email and text all the way through to ﬁlleting ﬁsh in the dark in record time. We love being around people who love what they do and Ralph’s enthusiasm had us ﬁred up pretty quickly. Our day also started oﬀ with a bang when he demonstrated how to bait the hook, dropped the line down, demonstrated how to jig and pulled up a Walleye within seconds. We took this as a good omen for how the rest of our day would go and we were not disappointed.

My kids hadn’t ﬁshed a ton in their lives as we typically reserved it for an activity to do up north with Grandpa and they had only ever done cast ﬁshing for pike. Jigging for walleye was a brand new experience and Ralph was a patient, enthusiastic, and encouraging teacher. My daughter had never got a ﬁsh in the boat before and that was her big goal for the day. That goal was realized in the ﬁrst 5 minutes (and then about 30 more times). By the end of the day under Ralph’s tutelage, she was acting as ﬁrst mate, baiting hooks with minnows, netting ﬁsh, expertly holding the walleye (so as not to get poked), removing hooks from the ﬁsh, releasing them and even teaching her big brother how to take a ﬁsh oﬀ the line. She even caught the biggest pike of the day that was about half her body length and an absolute thrill for her to reel in. 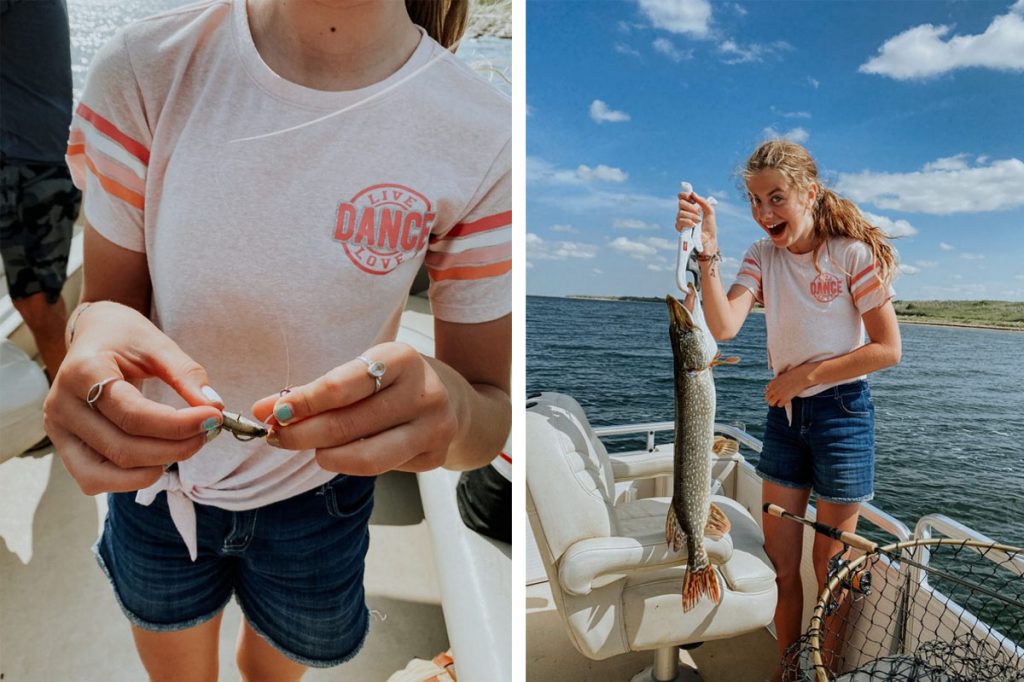 I wasn’t a complete ﬁshing noob. Though I don’t have a ton of experience from the last decade I had racked up hundreds of hours angling before that and I still learned an enormous amount ﬁshing with Ralph. Things like the “walleye chop”, ﬁsh behaviour, types of bait and hooks, the eﬀects of geography and weather, conservation and stewardship methods, insight into guiding, fan casting, scouting and tournament ﬁshing were all fascinating to learn about. When you spend a day on this type of excursion it’s easy to feel like you’ve learned what likely would have taken you months of ﬁshing to learn on your own. 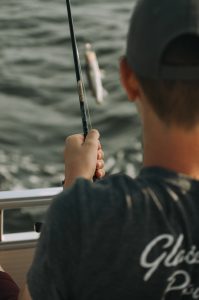 As it’s a passion of his and as a guide, he spends time keeping up on the newest technology and strategies so as to evolve as the sport evolves. When you book with Prairie Pro you can be assured that you will be using top-of-the-line everything and the only thing you need to bring is yourself and your snacks (which there was no time to eat because we were busy catching ﬁsh!)

The St.Croix Eyecon rods were the lightest, most balanced and most sensitive rods I’ve ever used. When you add Ralph’s uncanny knack for knowing there is a ﬁsh nibbling at your bait even before you do, it’s a winning combination. I can’t tell you how many times Ralph was taking oﬀ a ﬁsh oﬀ one of our lines or baiting a hook and he’d tell another person “set your hook!” and sure enough there was a ﬁsh on the end. He also repeatedly could tell from looking at my rod when I had lost the minnow on the hook in the water.

We spent the day on the 23-foot Tritoon boat which was perfect for a larger group and a blast to ﬁsh from. It’s roomy and stable enough to not budge even when all four of us were crowding the “lucky chair” so as to catch more ﬁsh. He also has 2 other tournament ﬁshing boats available for guided trips (Nitro 2021 and Ranger 621). We all enjoyed learning more about the high-level ﬁsh ﬁnder, checking the screen, interpreting it and we’re so thankful for the electric trolling motor equipped with GPS that would keep you exactly where he wanted the boat to stay.

That was an important feature as Ralph guided us into precise areas where the walleye were present and active. Each spot he brought us to resulted in ﬁsh in the boat within minutes and as the ﬁsh moved, he moved us on to new spots. I know every ﬁshing day is diﬀerent and it’s a blast just being on the water but we caught and released a lot of ﬁsh. I’d be curious to know how many steps Ralph got in running about the boat re-baiting hooks and taking ﬁsh oﬀ the line (at least before everyone got comfortable doing it themselves). 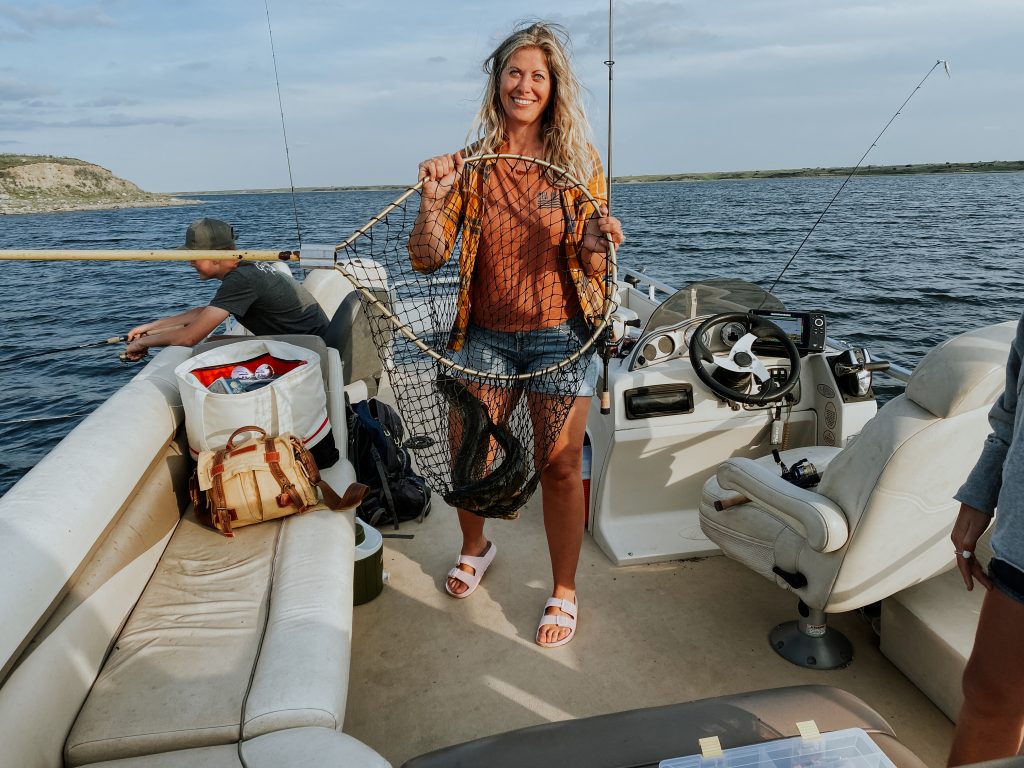 As an outﬁtter, Prairie Pro oﬀers 2 fantastic services. One being the Daily Guided Fishing and the other being the Fishing Academy where you get the chance to learn a wide variety of angling skills. Whatever you choose Ralph fully tailors the experience to your group and their abilities. 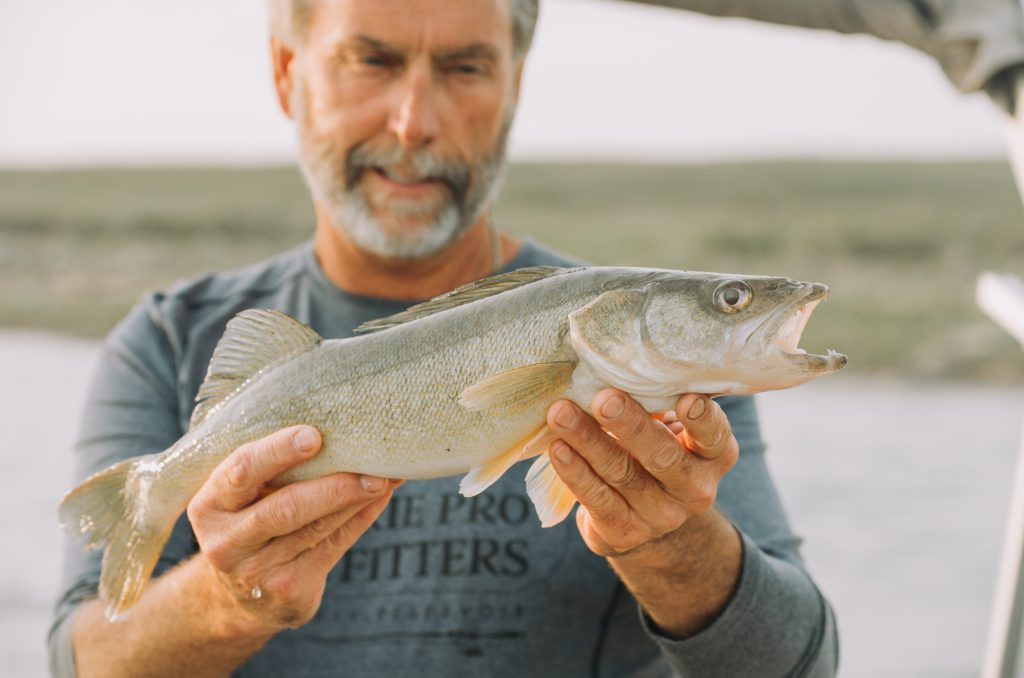 To say that we had a blast is an understatement. We had fun – for 8 hours straight. There was so much laughing, joking around, cheering, and easy conversation. I wasn’t sure how my kids would do in the boat for that long (remember these are the children that get bored hiking up majestic mountains) but they were engaged the entire time. The hours ﬂew by. Ralph is engaging, funny, an easy conversationalist and has such a wonderful way of teaching and instructing that honours where everyone is at and engages and empowers them. I think that’s a rare gift. 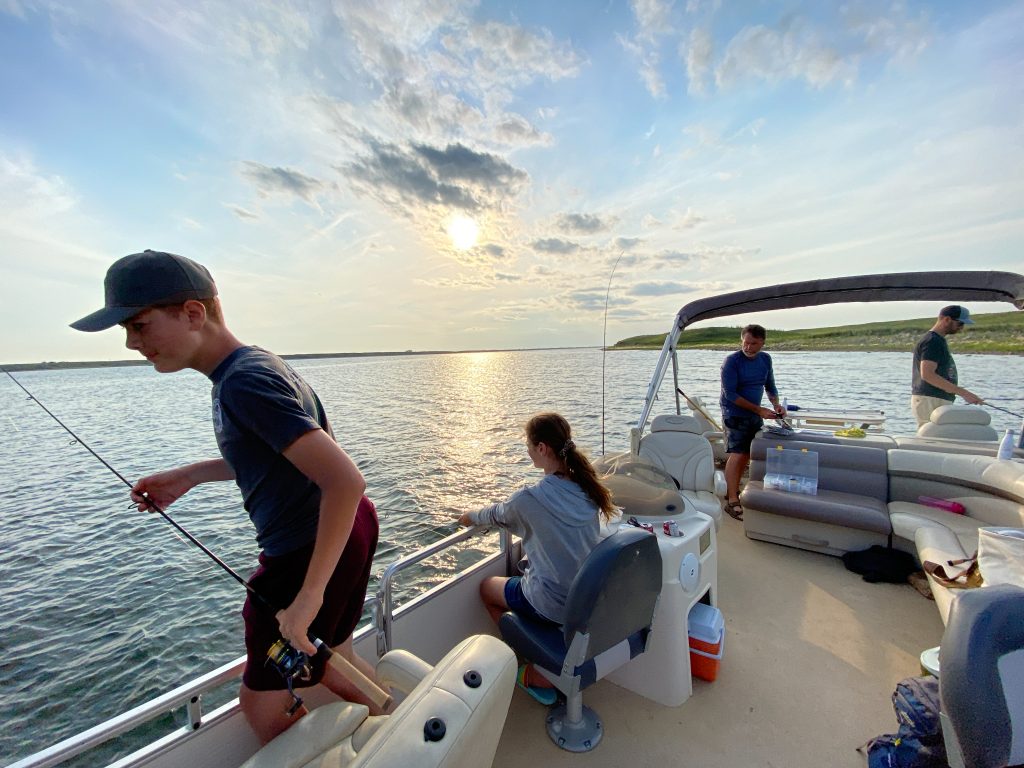 Not only are we fortunate in this area to have the massive body of water that Raﬀerty is but we’re fortunate to have an outﬁtter the caliber of Prairie Pro to provide these amazing multi-dimensional experiences. Whether you’re looking for a family outing, a corporate excursion, a bachelor/bachelorette party, etc this is an adventure that won’t disappoint. To book you can head to www.prairieprooutﬁtters.com and I suggest you get to “catching memories” ASAP! 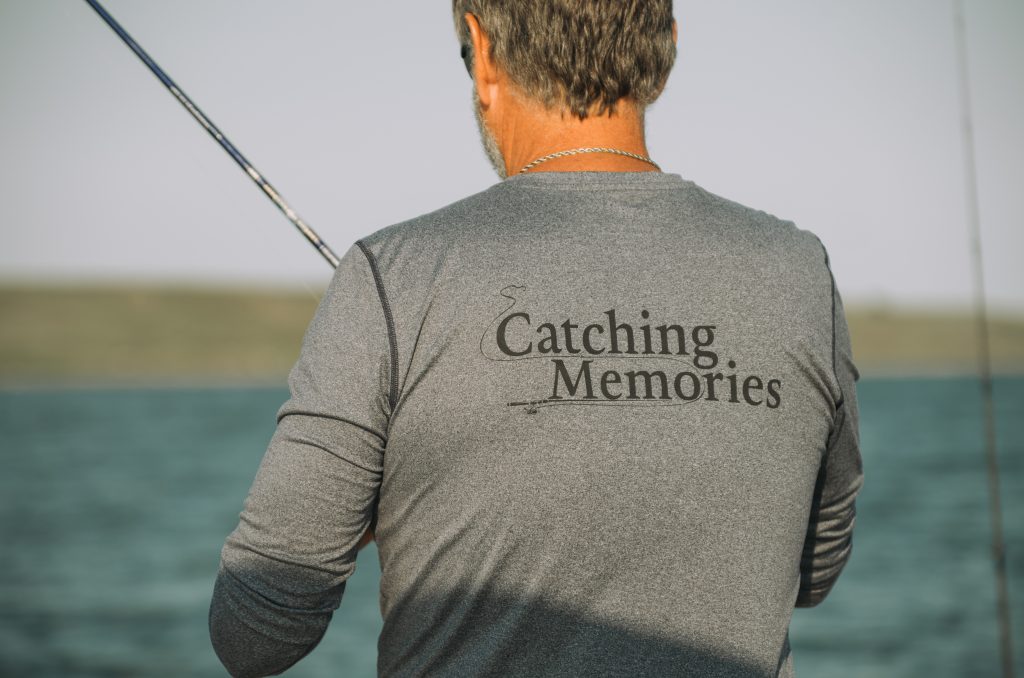 I’m guessing that a day on the water with Ralph would also give you a leg up in the Bass Battles hosted at Boundary Dam (even though you’re not ﬁshing for Bass on Raﬀerty). The Bass Battles take place July 31- August 2 and it’s sure to be a good time. Remember we have the only place in the prairies where you can ﬁsh Bass!