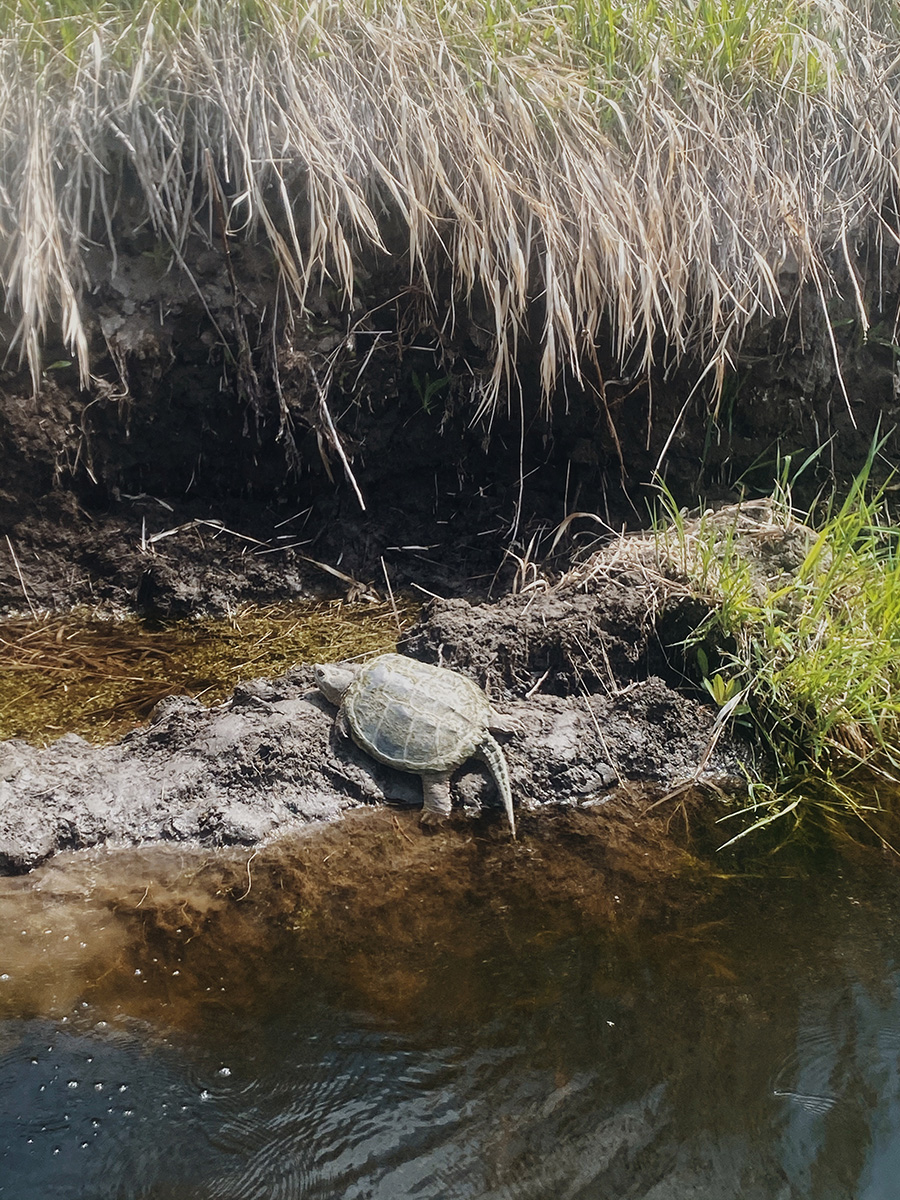 The sun hung low in the sky resulting in a soft glow of warm colours as we snaked along the river on our paddleboards. The mood was pretty chill and calm when we heard a large rustling on the river bank behind us. Blackburn and I both turned our heads quickly only to catch a glimpse of a mammoth reptilian creature scooting into the murky water dragging its long spiky tail behind it.

What on earth was that?

It was getting dark and our imaginations turned on overdrive. Did we just see an alligator on the Souris River? Was this a situation like the Koi fish that ended up dumped in Boundary Dam only to grow to massive predators? Had someone released a baby crocodile into the Souris that was now on its way to take a bite out of my paddleboard? We speculated the whole journey home and then I turned to research what it could possibly be. I had paddled the river enough to see myriads of painted turtles, beavers, blue herons, various fish, muskrats, and even had an angry Canadian Goose dive at my head, but this beast that seemed in that glimpse to be a solid 18 inches wide, brownish-green with humps and “spikes” wasn’t anything I had a reference for.

It didn’t take too much searching to settle on the conclusion that we must have seen a common snapping turtle.

The common snapping turtle is generally found from Southeast Saskatchewan to Atlantic Canada. We’re pretty lucky in that regard that you likely won’t see one of these dinosaur-like creatures anywhere else in Saskatchewan beyond our little corner. They prefer slow-moving water with mud bottoms and though they don’t have many predators as adults they are vulnerable due to habitat loss and road mortality. The thing I find most fascinating about these creatures is their lifespan. Adults can live over 100 years and any turtle you see with a carapace (upper shell) of 18 inches + is likely between 70-100 years old.

In a fortunate result of exploration, we came across an area near Estevan that was loaded with snapping turtles! Various trips allowed us to count between 5 and 32 snapping turtle sightings each venture (plus over 200 painted turtles.) These beasts are fascinating to come across and I want to share how you can get a peek at them as well. 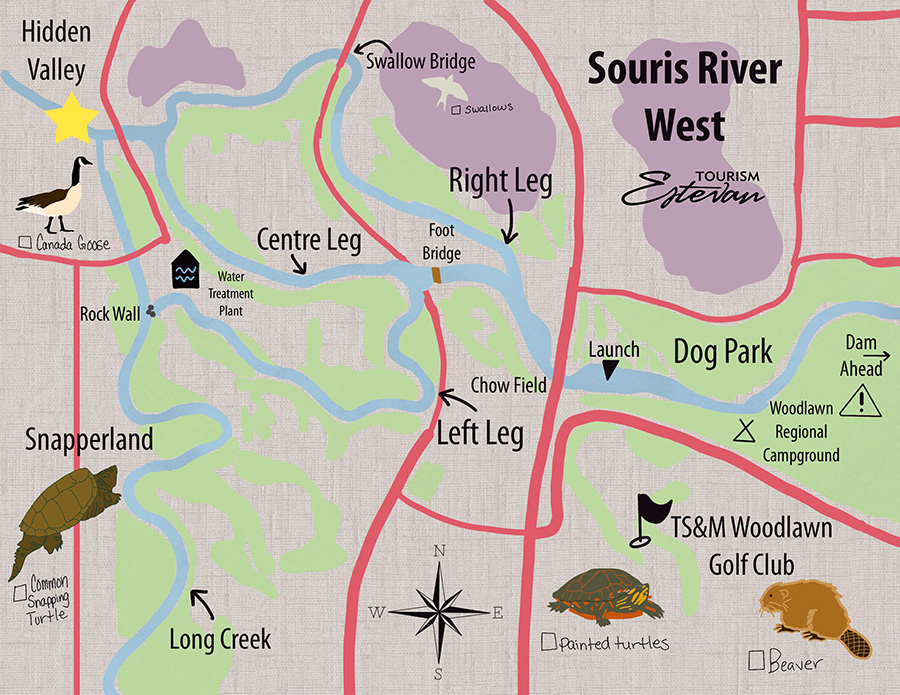 On the above map, you see a label “Snapperland” (we were studying Vikings at the time and they seemed to name everything ________land. Iceland, Greenland, Vineland, etc so we follow suit). As you’ll note Snapperland is actually on Long Creek and there are a couple of ways you can get to the area.

The first is by launching near the dog park where the map indicates “launch”. From there travel west under the highway bridge, then under the footbridge and down the “Left Leg” until you get to the Rock Wall. Here you’ll have to get out of your kayak or off your paddleboard, climb the small rock wall and pull your craft across to the other side. You can then get back in and continue paddling south. The creek will wind and after about the 4-6 bends in the river, you should get to the area where the snappers hang out. Alternatively, you can launch right next to the yellow star (above the goose’s head). Right after the traffic bridge, there is a small footpath to where you can set your craft in the water. Make sure you’re on the south side of the bank.) 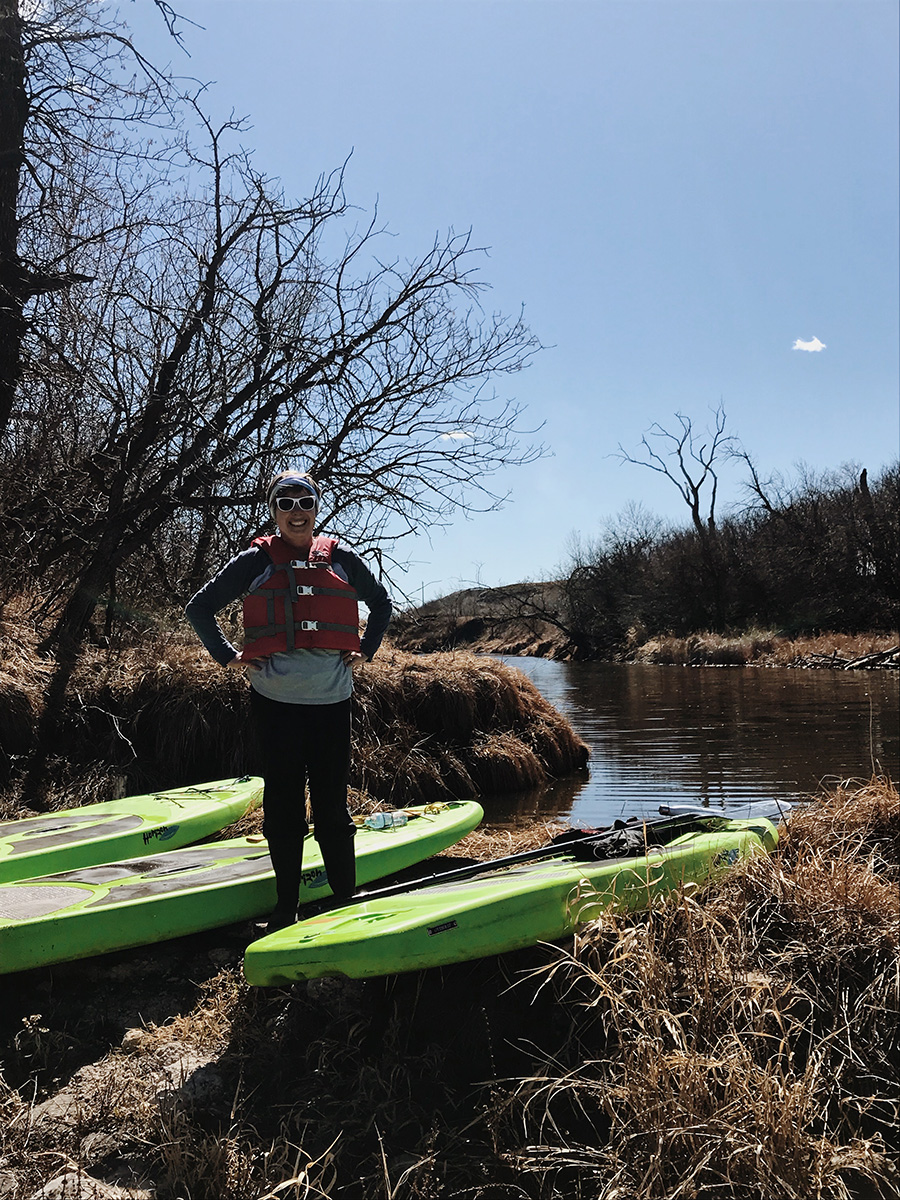 As you venture into Snapperland it’s important that you keep your eyes peeled and your noise to an absolute minimum. You’ll want to constantly scan the riverbank looking for the large mounds that are too symmetrical to be a rock. Especially in early spring (April-May) we find them consistently out sunning themselves on the banks. They are fairly camouflaged but once you spot a few you’ll know what you’re looking for. These creatures are quick to move into the water if they sense anything out of the ordinary, so again, it pays to be very quiet once you get in range of their area. Often times the snappers will sit partially in the water like this one. 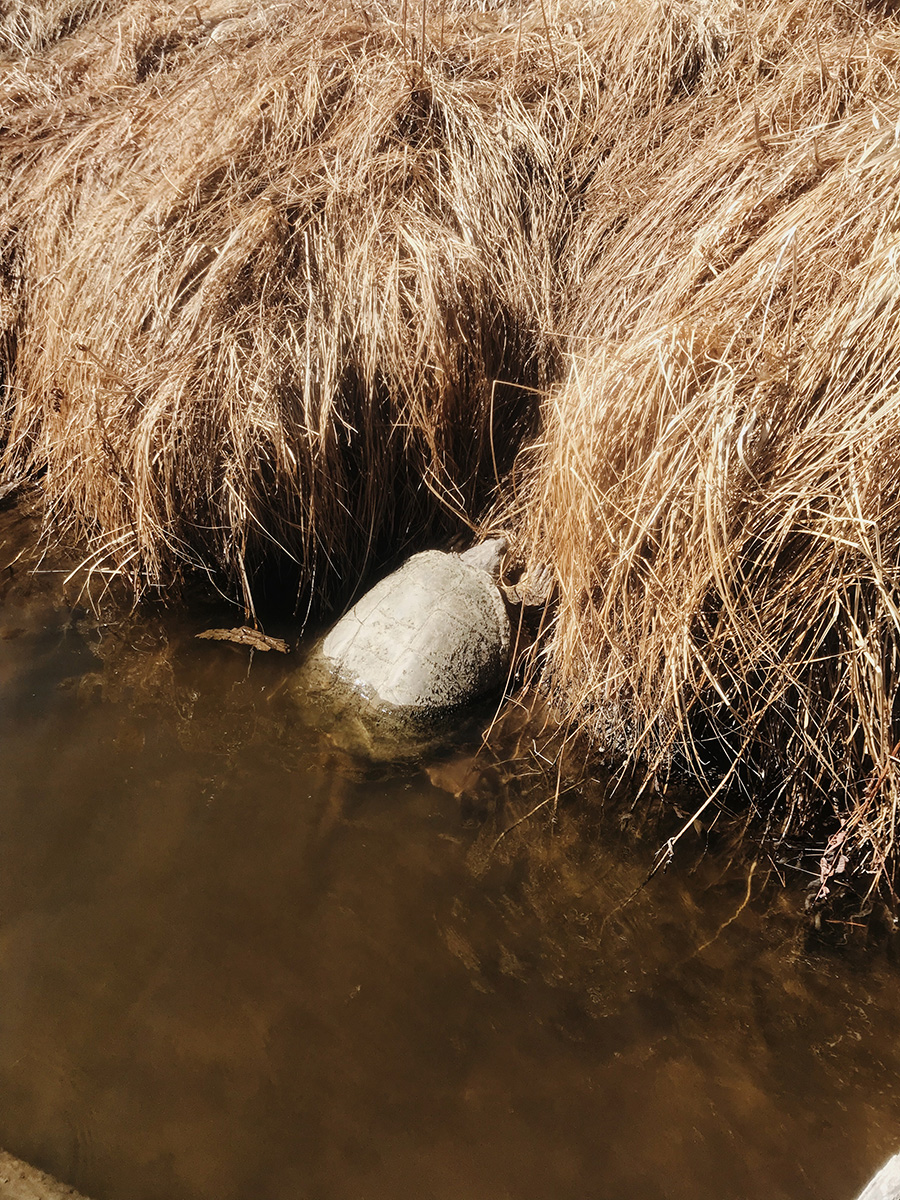 We’ve noticed that a couple of the largest (oldest) turtles like to sun in the same spots year after year and are often less skittish. We can typically get fairly close to them to observe, get pictures and video. As always, we want to disturb the wildlife as little as possible.

It should be noted here that all turtles in Canada are protected species and considered at-risk species. In no situation should turtles be caught or removed from their natural habitat. Snapping turtles are extremely vulnerable in the nest and as hatchlings. It takes 15-20 years for these turtles to reach sexual maturity and start reproducing so it’s important that all turtles are left to maintain their population.

Another place you can look for the turtles in that area is near large fallen trees in the water. We slowly approach and often find large snappers congregated in the shallow water around the limbs of the tree. On one trip with my kids a few years ago we brought our GoPro cameras and were able to get some snippets of footage of the turtles underwater. Considering we were all on paddleboards and trying to stand, paddle and film the footage was pretty choppy lol. You can check it out here if you wish. https://www.youtube.com/watch?v=9gJ-AoQcPxE 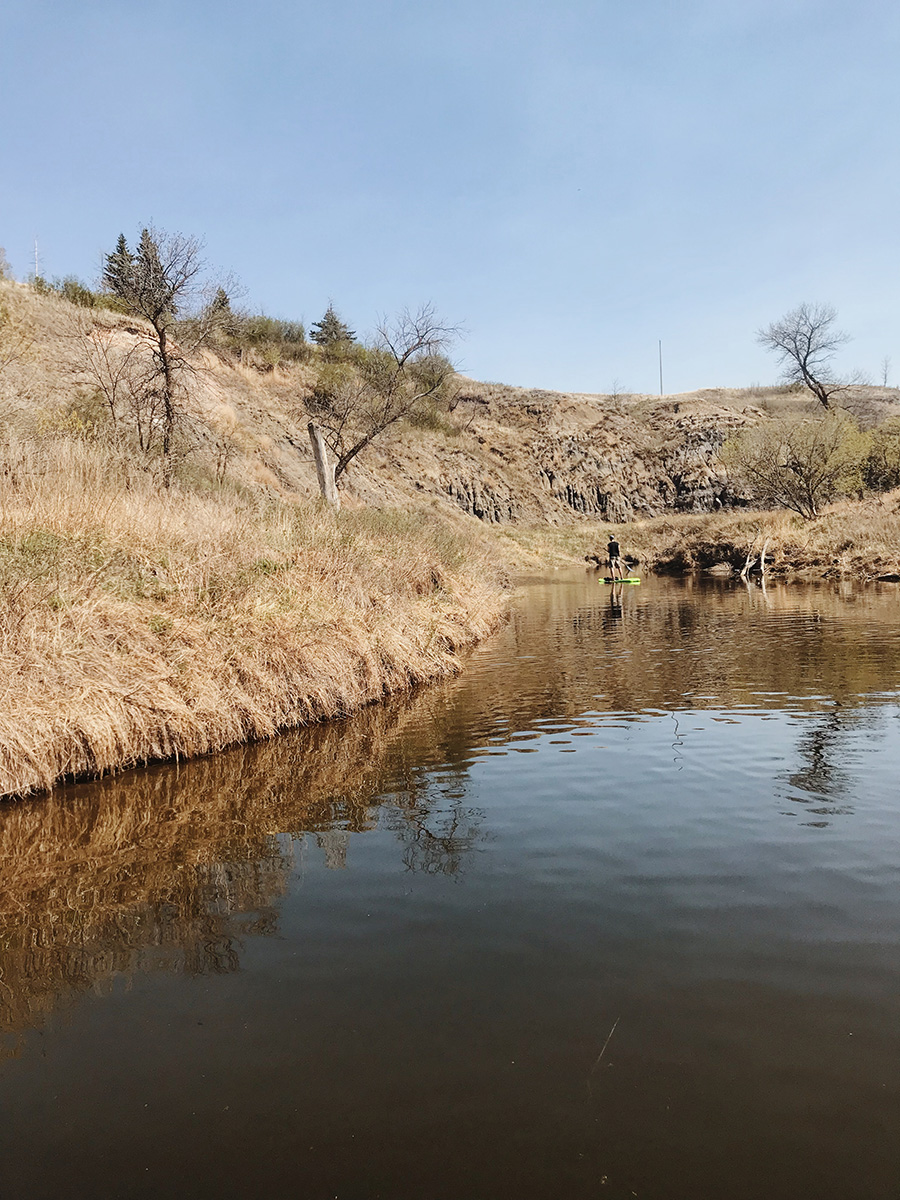 If you’re looking for some more pro footage of snapping turtles you can check out Coyote Peterson’s channel Brave Wilderness( https://www.youtube.com/user/BreakingTrail ) for some great content. He even allows himself to be bit by one – it’s a bit gruesome. Be warned.

Though we’ve encountered snapping turtles sporadically in various spots along the Souris River, this area on Long Creek affords the highest probability of a sighting. We are just encroaching on the season where snapping turtles are typically the most active in our area and hopefully with this guide you’ll be able to get out and respectfully make your way through their habitat to witness these prehistoric-looking creatures. Be sure to check out our social media channels for some video footage of these river dwellers. 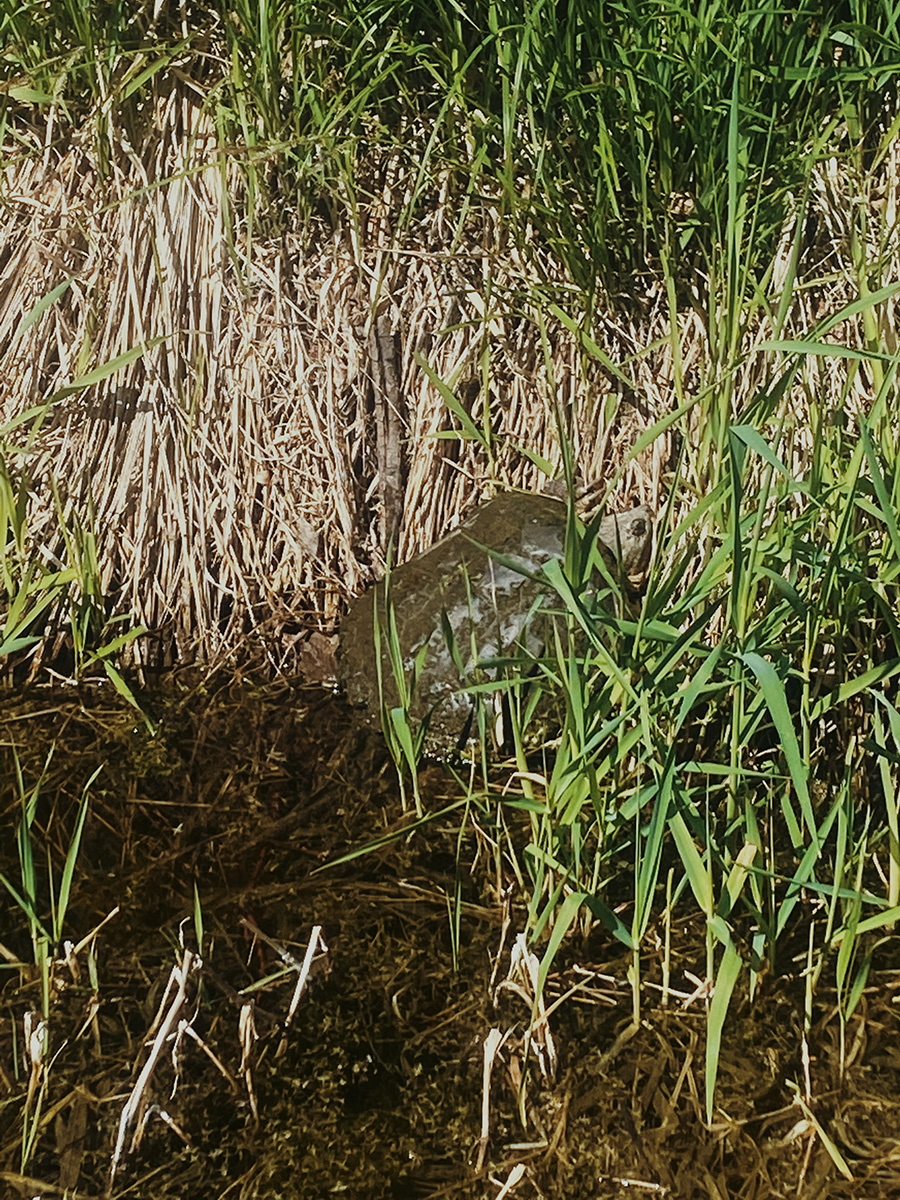